Tomorrow on Saturday, 27 March 2010 at 8.30 PM of your local time, Earth Hour 2010 will take place. If you still haven't heard about it: This event has been inaugurated by the World Wildlife Fund (WWF) Australia in 2007 to raise awareness of climate change issues by gathering people to switch off their lights for one hour.

I know that we need more than one hour to take good care of our beloved mother earth. The more important part should be to implement green actions and green thinking in our daily life. Still, I love the spirit of this event and I will try to participate again. Last year, we joined for the first time in Earth Hour and my son suggested to play shadows on the wall. You can might see some photos I took with my mobile camera in the collage below. Hopefully this year I can manage to get brighter shots with the Canon EOS 500D. Have a wonderful weekend, everyone. 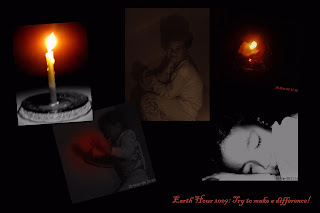 Cool. I like when the lights go out and only candles are burning.

Hi Rosidah, I found this post so interesting. Great idea and awareness is so important. Love your collage. Happy weekend!

Never heard about it
Thanks for telling us :-)
We receive tomorrow summertime
but thats not the same ..... LOL

Have a wonderful weekend
Enjoy .....

I think it should be a combined event - earth and snuggle hour. What better excuse to curl up with someone you love?

I think Earth Hour is so important..
The place where I stayed, we always
switched off all the lights...
then the families will go out in the dark
with candles... really COOL.

Have a great weekend, Rosidah.

Happy Earth Hour Rosidah, and enjoy the rest of ur weekend! :)

I'll be participating again this year.
Hugs and blessings,

Thanks for the heads up Rosidah, I hadn't heard about it. Hope you are having a nice weekend :-)