The sister's new arrival was one of the most highlighted events in the neighborhood. Everyone was curious about how they would look in flesh and bones. Despite there were some photos broadcasted in advance, no one wanted entirely rely on them. It has been proven that you could easily be turned into a fool by putting too much trust in the magic of technology.

However, this was not the case. The sisters were even more beautiful in real life. It didn't take long, and everyone was put under their spell. Each of them had a unique personality, difficult to ignore and to turn away your head. No matter if blond and outgoing or more introvert with black hair, their strong presence was felt wherever they went. The sisters really knew how to add more fun and spice to life.

The only downside of the sisters was that they still seemed to have a great lack of responsibility most of the time. Turbulence followed them wherever they went, and they were labeled as the ultimate neighborhood crashers. Some things ended up in real disaster, and it was hardly to take control.

Authority was beginning to think about taking strict measures. After all, everyone should be able to learn their lessons and follow some rules. But, this was not a simple task to do. No one appeared to be immune to see into the sisters’ hypnotizing eyes. Unless someone with greater power would arrive, the neighborhood was doomed forever by the charmed.

“Charming people live up to the very edge of their charm, and behave as outrageously as the world lets them.” 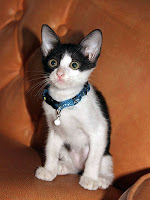 Note: We just got two kittens from a friend.
Tales on Tuesday Rules:
You could join Tales on Tuesday by telling a short, short (500 words or less) story based on the week's theme. Each theme will be the title of a TV show to provide some inspiration. Your story does not have to have anything in common with the TV show.
This week's theme: Charmed
Tags: Literature, Tales on Tuesday
Share:
Newer Post Older Post
Loading....

Love this story. Nothing more than having charmed sisters. :) This is left wide open for a continuation my friend :) Well done :) Have a great day :)

This was worth waiting for. Charm does get you out of a lot of trouble.

Cute kittens. I hope those charmed sisters get locked up somewhere so the neighborhood is safe again.

Rosidah I enjoyed this quite a lot. I would like to see what you come up with next week!
xoxoxoxoxox